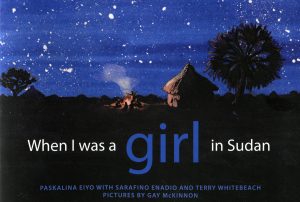 When I Was A Girl in Sudan

This book was created for Sudanese children in Australia and South Sudan, and for all children, everywhere, so they can learn some Ma’di language and understand a little about what life is like for Madi girls in South Sudan.

Terry and fellow writers Julie Hunt and Anne Morgan wrote the words. Gay McKinnon drew and painted the wonderful pictures. Julie Hawkins designed the book. Sarafino checked all the Ma’di words carefully, and he and Terry wrote the praise song. Paskalina Eiyo and her family participated enthusiastically and generously. 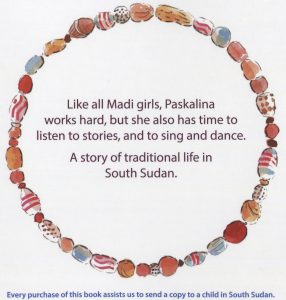 This story belongs to…

…Paskalina Eiyo, a Madi elder from South Sudan, who was born at Opari, near the border of South Sudan and Uganda. Paskalina lived the life of a traditional Madi girl and grew up speaking many languages, including Ma’di and Arabic. She learned English at the Loa mission school.

Later, Paskalina worked as a teacher at Iriya Primary School and as a practical nurse in Juba hospital. When war came to Sudan, Paskalina fled to Uganda with her children, to escape the fighting. From a refugee camp in Uganda she and her children were resettled in Tasmania. She enjoys living in Australia but misses her home in South Sudan. Paskalina has carried Madi culture and memories with her to her new home in Australia, and she is happy to share these with others.

Paskalina is a strong member of the Madi community and a wonderful singer, dancer and storyteller. She told Sarafino and Terry many stories – about tricky Mr Hare and about her life as a girl in Sudan. She sang us songs, showed us Madi dances and explained how to cook Madi food. Sarafino translated the stories and Terry wrote them down in English. 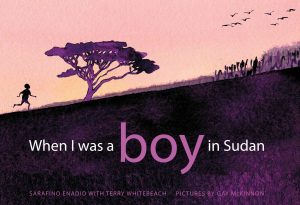 When I Was A Boy in Sudan

A companion to When I was a Girl in Sudan, also created for Sudanese children in Australia and South Sudan, and to share Ma’di language and culture.

Sarafino Enadio told Terry many stories about Sudan. She recorded and wrote them all down. But the story she loved most of all was the one about children guarding the crops. So, Terry said to Sarafino, ‘Let’s make this story into a picture book!’

Children worked hard in Sudan. When Sarafino was a boy, he had lots of work to do: helping his parents, collecting water, looking after younger brothers and sisters and running messages. But the most important job the children had was guarding the crops from birds and animals. The gardens had no fences so the children had to keep the crops safe till harvest time. It was hard work, but there was time for fun as well.

When I Was a Boy in Sudan is Sarafino’s story. Learn more about Sarafino here.

When I was a Girl in Sudan   |   When I was a Boy in Sudan
Copies may be obtained by contacting me to order.
RRP $15 plus P&P

All proceeds from the sale of these two books are used to finance sending English language books to Madi students from Iriya School in the Loa district of the Madi homelands.

In 2012 Iriya School had 605 students, with only 21 books to share between them. One was a very dated English reading book that I had used when I was at school in the early 1950s! Unusually for Sudan, more than half the students at Inye School were girls. The Madi value education, and send their daughters as well as their sons to school if they have the financial means.

Many of the schools in South Sudan are built and financed by missionaries. The teachers are doing their best in makeshift schools in refugee camps, but the Civil War and outbreaks of violence have seriously disrupted the education of many South Sudanese people.

Since we visited, the students at Inye School and their families have been forced to seek safety in Pagirinya refugee camp in Uganda. In 2017 Sarafino travelled to Uganda to deliver 1200 copies of the picture books to these students, who still are urgently in need of English language books.