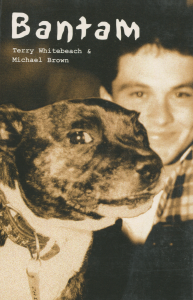 Mick’s got his stuff packed ready to move, but he knows he’s not of the hook with his mum, yet. They’re heading for the big serious conversation about THE FUTURE. His. She’s waiting for the right moment. They’re both edgy. They both know he’s going and they both know he won’t listen to what she says. But they know she’s going to say it, anyway.

Leaving home. The joys and sorrows of first love. The secrets of successfully keeping chooks. Mick and his mates have got a lot to learn. But while their despairs are many their comradeship is life-saving and their humour never fails them.

Punctuated by dogs and chooks and the daily tragicomedy of small town life, Bantam follows Mick and his mates as they constantly court disaster and struggle to hold on in the roller-coaster ride of life on the dole.

Bantam was written by Terry Whitebeach and her son, Mick Brown, via phone between Alice Springs and a small country town in southeast Tasmania. Mick (Michael Brown) is a horticulturalist and occasional writer who has a small holding in Tasmania. He greatly prefers building fences, creating gardens and planting crops to writing.

I found Bantam a wonderful book. It is very fine, gritty, highly readable, yet with depth and resonance. I think it makes an important contribution to contemporary Australian literature, with its ordinary, inclusive voice, and the way it articulates both hope and hopelessness in many parts of Australian society.

Find out more about Bantam – Launching it with Alexis Wright’s chooks! 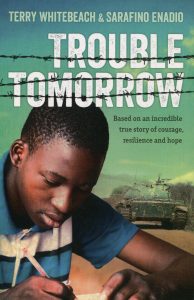 Available from Allen and Unwin.

Teacher notes can be downloaded from Allen and Unwin, at the above address.

Obulejo dreams he is with his friend Riti, hauling in spangled fish, his dusty feet cooled by the tumbling waters of the Kinyeti River.

Obulejo slams awake, heart racing, and scrambles up off his mat. Gunshots and screams jab the air. Flashes of light pierce the darkness. The Rebels!

Obulejo’s family has already been torn apart by the civil war in Sudan when the Rebels come again. It’s night; Obulejo wakes in his boarding school to the sound of machine guns and people screaming. He does the only thing he can – he runs for his life, knowing that if the Rebels catch him, they will make him go to war. He’s fifteen: old enough to fight. He has no choice but to make the terrifying journey, full of danger from wild animals and pursuing soldiers, across the border to the refugee camp in Kenya.

But even if he makes it, will he really be safe from the Rebels? What will his future hold? And will he ever be reunited with his family?

I’m curled up in bed reading Trouble Tomorrow. I’m in awe of your skill, Terry. Obulejo’s life’s drama told without pretension, powerful, but so brilliantly unfussy and without artifice, your footwork so assured and balanced. Sarafino is a lucky man to find such a skilful story weaver.

This is an important book. Every politician in Australia should read it so they really get some insight into refugee experience. 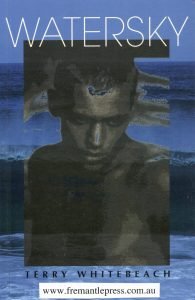 ‘The first time I saw Jana I thought she was a crazy arrogant bitch. I’m outa here, I told myself, but for some reason it didn’t work out that way…’

In fact, from the time Brodie McPherson meets the mysterious Jana he can’t seem to escape her.  Everything in his life changes, some for the better, some for the worst.  After the dreadful car accident there are manslaughter charges, the psychiatric ward – a different world, full of guilt and pain.  And Jana, she claims to be literally from another world.

With his life turned upside down, Brodie is forced to confront himself and reassess his relationships with those around him.

The impetus for writing Watersky was a powerful one – the despair of my own and other people’s teenage children. I had no answers, no magic spells to weave, only the art of the storyteller to call on.

Brodie is full of guilt and self-hate. He believes he will never be able to atone for the harm his anger has inadvertently caused. For him there is no safe haven. Despair overwhelms him. But as his story unfolds he begins to learn how to come to terms with the impossible, the unbearable, the unforgivable.

Read a review of Watersky.

There is a secret medicine given
to those who hurt so hard they can’t hope.

See also – ALL THE SHAMANS – poetry for young ADULTS.