As a writer and historian with a passion for human rights, and social justice, Terry Whitebeach has collaborated on a number of texts with her South Sudanese colleague, Sarafino Enadio, to share the experiences, language and stories of South Sudanese people with a wide audience.

Together, Terry and Sarafino have published four books, including a novel for young adults, Trouble Tomorrow, two picture books, When I Was A Girl In Sudan and When I Was a Boy in Sudan, which were written and illustrated collaboratively with other Tasmanian writers and South Sudanese community members. The first book written by Terry with Sarafino is A Little Peace: A South Sudanese Refugee Story. Read on or follow the links to find out more about all of these works.

A Little Peace will make a major contribution to our understanding of the lives of refugees and offer important insights into how we can all assist in creating a more harmonious society. 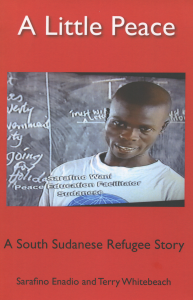 This is a book that all of us who seek to build a peaceful and inclusive world need to read and reflect on.

The complexity of language and conflict, of grappling with unfamiliar systems and cultures, are all espoused with intelligence and without rancour.

This book makes an important contribution to our work in improving respect and inclusion for all.

Written by Terry with Sarafino Enadio, a survivor of the Sudanese Civil War, A Little Peace is a life history compiled from interviews Terry conducted with Sarafino. The work contains an account of Sarafino’s early life with his family, and the war which suddenly separated him from his family, and left him, a teenager, alone, forced to flee into the jungle and try to make his way on foot to Kenya. Sarafino was to spend more than a decade in Kenya in refugee camps, not knowing where his family was, or whether they had survived. During that time, he trained as a UNHCR peace educator.

Eventually Sarafino and his wife and young family were accepted into Australia as humanitarian entrants. Although free from war, life in the new country is not without its difficulties, but Sarafino continues to strive for peace and to make his way with the same determination that ensured his survival in the Civil War and in the refugee camps.

A Little Peace
RRP $20 plus P&P
Copies available – contact me to order.

When I was a Girl in Sudan

When I was a Boy in Sudan

A picture book written by Sarafino Enadio and Terry Whitebeach, and illustrated by Gay McKinnon,